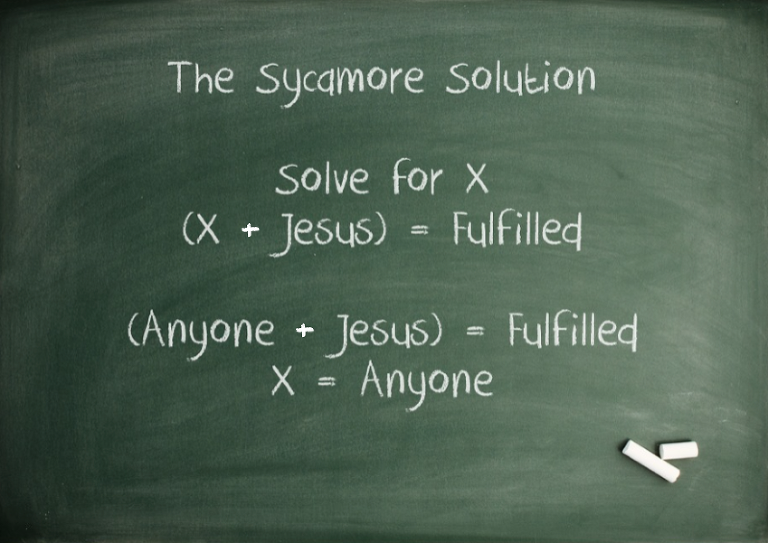 The Sycamore Solution
by Mindy Linkous

Jesus entered Jericho and was passing through. A man was there by the name of Zacchaeus; he was a chief tax collector and was wealthy. He wanted to see who Jesus was, but because he was short he could not see over the crowd. So he ran ahead and climbed a sycamore-fig tree to see him, since Jesus was coming that way.
When Jesus reached the spot, he looked up and said to him, “Zacchaeus, come down immediately. I must stay at your house today.” So he came down at once and welcomed him gladly.
All the people saw this and began to mutter, “He has gone to be the guest of a sinner.”
But Zacchaeus stood up and said to the Lord, “Look, Lord! Here and now I give half of my possessions to the poor, and if I have cheated anybody out of anything, I will pay back four times the amount.”
Jesus said to him, “Today salvation has come to this house, because this man, too, is a son of Abraham. For the Son of Man came to seek and to save the lost.” -LUKE 19:1-10

Zacchaeus was a tax collector who got rich skimming off the top. He didn't even hide it, flaunting his wealth, living on a noticeably higher income than an ordinary tax collector. He was living the high life but empty inside, not to mention everyone was taller than he was. News that Jesus was in the area was buzzing and it somehow triggered the emptiness lurking within and his focus zeroed in on Jesus to fill it. He was always figuring a way through things, using his smarts to cheat and using others to get ahead. He wanted to see Jesus, he needed to see Jesus. In his current circumstance it wasn't going to be easy.

He scanned the scene looking for his chance to get a good look at Jesus then it clicked and his focus zeroed in on the Sycamore tree. Towering above all the haters. He couldn't see past the naysayers or over his regrets. But his desire was higher than his stature. His desperation climbed over all his mistakes and insecurities, branch by branch. He dropped the old game book of ways to get it done on his own and climbed above the bad things he had done, above the looser self image, and above the condemnation of the crowd. He scaled that tree with all his heart and strength and found the perspective he was so desperate for. Clarity comes by getting into a position above your current circumstance beyond your past. Craving clarity with a desperation gets Jesus' attention.

Zacchaeus was accustomed to being looked down upon and avoided. But it was different with Jesus, when He came near He looked up at Zacchaeus and lavished grace upon him. Unmerited favor and acceptance. Jesus immediately called him close, "Come down, I must stay at your house today!" Jesus literally invited himself over to Zacchaeus' house. Instant connection, instant friendship. Once he was pushed away and left alone with piles of tax forms and receipts, now he was a friend of Jesus.

Eyes roll and whispers spread, "He is going to stay at the house of a sinner." The crowd was filled with people Zacchaeus had cheated. When Jesus befriended the guy the tax payers were mad at, their offenses widened. Now they were mad at both Zacchaeus and Jesus.

But Jesus' acceptance of Zaccheus changed him dramatically. He payed back all he had cheated four times over and gave half of his money to the poor.

No matter who you are, when you seek the Lord with all your heart you will find Him. So encourage others towards Jesus.

No one is exempt from the love and grace of God.
All who seek Him can find Him.
Jesus' acceptance changes lives.
Those changed lives change the world.

Anyone + Jesus = Fulfilled
X = Anyone

Get Up and Go

In a rage King Herod seized Peter and threw him in prison. James was just killed and the thirst for blood of the crowd was insatiable. A public trial is set for the next day, with the crowds against him. Arrested, put in prison, chained between two soldiers, guarded by 16 soldiers with more Sentry guards at the entrance. I never really thought of Peter as a gladiator in need of 20 armed guards. Peter was singled out, he was on his own. He was beaten and stripped, and the trial was right at hand. The odds were not in his favor. The crowds were stirring up trouble. And what does Peter do? Peter went to sleep chained between the two guards.

That night as Peter slept, suddenly an angel of the Lord appeared and a light shone in the cell. The light didn’t wake Peter up. This had been a bad day, he was out cold. The angel struck Peter on the side and that woke him up. “Quick, get up!” the angel said, and the chains fell off Peter’s wrists. The rattling of the chains, the light, and the freeing release of his wrists were all a blur. The angel snaps him into gear, gets him up and going. “Put on your clothes and sandals.” And Peter did so. “Wrap your cloak around you and follow me,” the angel told him.

Now that’s a wake up shake up! Stuck in an impossible situation lulled to sleep by the darkness, Peter needed to wake up get it in gear and get moving. Get up and go! Let’s go, let’s go, let’s go! Shoes, keys, wallet, phone, coffee. Let’s go we’re out the door! Sometimes we need to feel the push, wake up, see the light, and hear the get up and go. Now things are coming into focus.

Peter followed the angel out of the prison, they passed the first and second guards, and then they came to the Iron Gate leading to the city. The Iron Gate opened for them by itself, and they went through it. The chains opened, the jail door opened, and finally the gate to the city opened. It was such a miraculous occurrence that Peter questioned whether or not it was a dream. Then he realized without a doubt that the Lord had rescued him from Herod’s clutches, an eye-opening miracle. When the gate to the city opened Peter's doubts were gone. It is the Lord!

Peter goes straight to Mary’s house (John’s mom). It is crowded, Rhoda goes to the door, “Who is it?” It was Peter, but how could that be possible? Rhoda recognized Peter’s voice and was so excited, leaves him waiting at the door without opening it and goes to tell everyone, “Peter is at the door!” They don’t believe her either, but Peter kept on knocking, when they opened the door and saw him, they were astonished.

Did you know that we have a Radio Studio right here at New Life? That’s right, 5 mornings a week you can tune in to hear great Christian music as well as messages and inspiring words! Tune in to Thee Morning Drive Monday-Friday 6:30am-9:00am on the following radio stations in the Space Coast Area: 89.3FM, 90.3FM and 88.9FM. The morning shows simulcast here on the website so you can listen from anywhere!

“Create in me a pure heart, O God,
and renew a steadfast spirit within me.” Psalm 51:10

A new life in Christ is something to share. These teens expressed to friends their love for Jesus in water baptism.